Harold Hanford was born in Morton, Lincolnshire in c 1899.
His birth was registered in Bourne in the March quarter of 1899 indicating a birth between January and March of that year.
Family History
Harold was the eighth child of James Hanford a Journeyman Butcher from Morton and his wife Elizabeth Ann Pikett (Also know as Elizabeth A Foster of Billingborough).
Harold’s father, James, was born in Morton c1866. He married Elizabeth Ann Pickett in 1889, she was born in Spilsby c1868. This marriage was registered in the Bourne District but it is likely that this could have taken place in Billingborough.
The children of James and Elizabeth Ann are:
Charlotte Elizabeth c1886
Agnora c1890,
Frances c1892,
James Fisher c1893 (WW1; Lance-Corporal Lincolnshire Regiment)
Alfred Sydney c1894 (WW1; Leicestershire Regiment)
John Foster c1896 (WW1; Driver)
May c 1898
Harold 1899 (WW1; 2nd Bn Lincolnshire Regiment)
Jesse 1901
Eric 1903
Gwendolen Pickett Hanford 1903
Violet Ann c 1905
Georgina Mary c 1907
Dora c 1908
Frank c 1911
Charles Ernie c1912

Harold Hanford
On the 1911 census Harold Hanford was a boarder in the Sandall Household in Morton. Herbert Sandall was a horseman on a farm along with Harold’s brother Fisher. Along with younger brother Eric the three boys were boarders with the Sandall family.
Harold is next mentioned in a clipping from the Grantham Journal from 21st July 1917 where his family is mentioned within the Morton correspondence because his parents had four sons all serving with the Army. 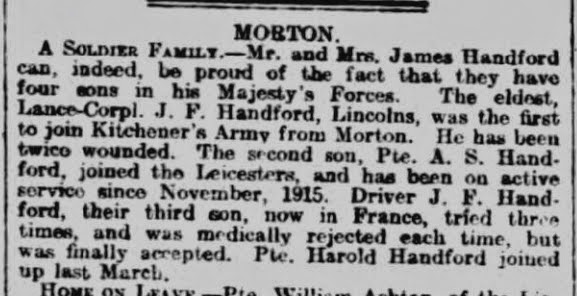 The Soldiers Died in the Great War records show Harold’s place of residence as Bourne Lincolnshire.
Other comments on the CWGC records show that Harold was the Son of James and Elizabeth Hanford, Morton, Bourne, Lincolnshire.
The final piece of information about Harold was found in the Grantham Journal of 5th July 1919. This mentioned that Harold’s parents had now received official confirmation that Harold was now officially presumed killed having been listed as missing on 22nd March 1918.
Military History
Harold’s war office records are yet to be uncovered and may be part of the records that were destroyed by fire in the Blitz.
The Medal Rolls do not show a Harold or H Hanford in the Lincolnshire Regiment and so more research will need to be done on this point.
From the Commonwealth War Graves Commission we know that Harold was serving in the 2nd Battalion, The Lincolnshire Regiment, when he was killed on 21st March 1918. This was the day of the Great German Offensive (First Battles of the Somme 1918) which saw the enemy attack across a 54 mile wide line using many more divisions than the allied army.
From the history of the Lincolnshire Regiment we can piece together the following information.

February 1918 saw a great change in the way Divisions and brigades were formed. This saw both the 1stand 2nd Battalions of the Lincolnshire Regiment both being attached to 62nd Brigade (21st Division) on February 3rd 1918. It was very unusual to see two Battalions of the same regiment fighting together.

On the night of the 20th March the 21st Division was holding part of the line east of Epehy and at the southern point of the Flesquieres Salient. The 1st and 2nd Lincolnshires were holding a section of this line near to the Canal Du Nord, just north of Peronne.

Shortly before 5am the enemy opened with an intense bombardment of gas, high explosive shells and trench mortars against the whole British line. Roads behind the line as well as the front line and support trenches were continually bombarded for four hours.

At 9:45am the German Army advanced through the thick fog which hung over the lines. The outpost line was overwhelmed by the enemy before it had chance to put up a fight. The main lines had expended their machine gun ammunition during the early morning fog and fought bravely against advancing enemy mounted units. Battalion headquarters was overrun during the day and fought its way up Chapel Hill. Parts of the 2nd Lincolnshire’s defended Chapel Hill, towards the rear of the front line along with 2 tanks.

The main line held during the day, although at times this was precarious and at some times critical.

The Lincolnshire Battalions were eventually relieved by the South African Scottish by 8am on the 22nd of March and moved safely back to the Pioneer Camp at Heudicourt.

From the battalion diaries of the 2nd battalion Lincolnshire regiment we find the following entry for 21st March 1918;

Batt received order MAN BATTLE POSITIONS ‘C’ Coy comes under the orders of O.C left sector front line (OC 1st Bn Lincolnshire Regiment). A B & D Coys marched independently to their allotted positions in YELLOW LINE. Bttn Head Qtrs marched to railway cutting at W23.a.8.1. This operation was rendered excessively difficult owing to a thick fog and heavy ENEMY gas shelling. Coys established themselves in their positions soon after 7am though stragglers continued to report until 10am.

Distribution C Coy with 1st Bn Lincolnshire Regiment. 3 Coys in YELLOW LINE with left Coy resting on railway at W23 central with the right Coy at approximately W18 central. Bttn Head Qtrs at railway cutting at W23.a.8.1, these positions were maintained all day against repeated attacks by the ENEMY.

About 12 noon a party of the ENEMY succeeded in getting round the left flank under cover of a sunken road at W18.c.9.3 This party was engaged by Bn Head Qtrs and a gun team of the Machine Gun Bn, a number were killed and the remainder (about 50) surrendered.

Harold Hanford was originally reported missing and later presumed as died during action on 21st March  1918. 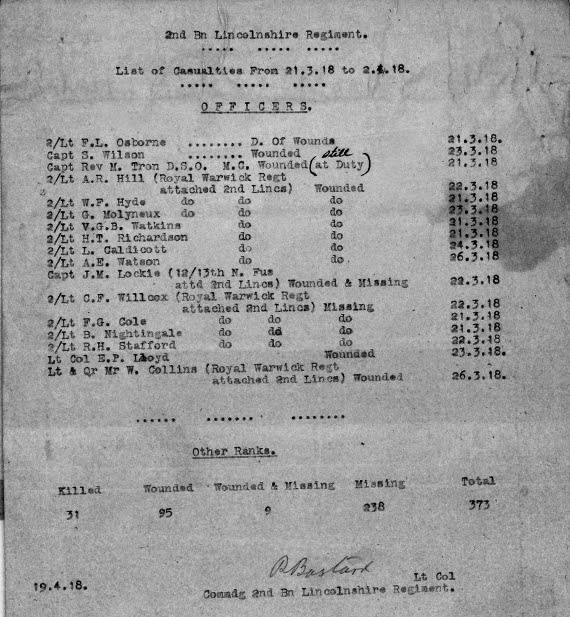 Memorial
Private Harold Hanford 49402, 2nd Battalion, The Lincolnshire Regiment, is remembered with honour at Le Cateau Military Cemetery in the village of Le Cateau-Cambresis, 17km south east of Cambrai.
Grave Ref: I. B. 7.