The following soldiers lost their lives in the Great War 1914-1918 and appear on a memorial in St Mary and All Saints Church in Kirkby Underwood. 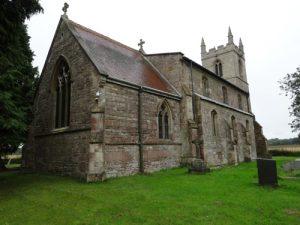 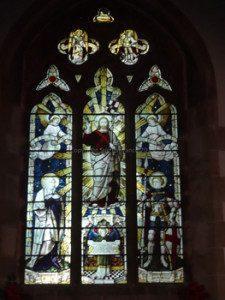 The main memorial in the church is in the form of a stained glass window in the east end of the chancel.

A dedication to the window reads:-

THE MEMORIAL WINDOW at the east end of the chancel was designed and executed by Messers BURLISON & GRYLLS, Window Artists, LONDON
– It was unveilled by W. DYSON Esq of BULBY HALL and dedicated by REV CANNON W. LAYNG. Rector of RIPPINGALE and RURAL DEAN of this deanery on 24th OCT 1920.
JOHN SMITHSON BARSTOW M.A. RECTOR
HENRY BURBANK, THOMAS WYER, Churchwardens 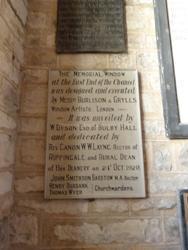 A panel within the window reads:- 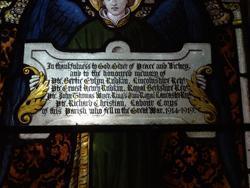 in a lower panel of the window a separate piece was added when the makers realised that they had left off Pte Christopher Hill. This panel has faded over the years and now all that can be read are the words York and Lancaster Regt.

The original memorial plaque that was in the church was in the form of an illuminated manuscript in a glass photo frame in a similar style to the insert within the window. This was stolen on armistice day some years ago. The current memorial plaque is a wooden replacement and was made by local carpenter, Ernie Wyer. 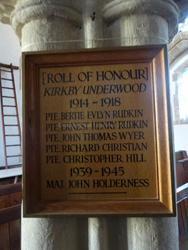 War Memorial Unveiled and Dedicated – Sunday last will live in the memory of all the parishioners and many interested in this little village. The Church services commenced with a celebration of the Holy Eucharist at 8 a.m., followed by matins and sermon at 11 a.m. The special service was at three o’clock and every seat in the church was occupied. Prayers suitable for the occasion were offered by the rector, Rev J.S. Barstow, the special lesson being read by Mr. Wm. Dyson of Bulby Hall, who proceeded after the singing of the hymn, “Stand Up, Stand Up for Jesus” to unveil the beautiful stained glass window, which during the week had been fixed in the east end of the Church. It was then solemnly dedicated by the Rev. Canon Layng – To the Glory of God, and in grateful memory of Bertie Evelyn Rudkin, Ernest Henry Rudkin, Richard Christian and John Thomas Wyer, and as a thankoffering for peace and victory. Mr. Dyson standing on the chancel steps then spoke a few words, which appealed to his hearers. Referring to the long connection of his family with the Church and district, and to the happy days spent in the neighbourhood, he expressed the regret felt by all of them at the coming severance, but trusted that the Church would continue to progress, and believed that the rector, who had served in the late war, was particularly fitted to help and sympathise with his people I their joys and sorrow . The window he regarded as the most beautiful war memorial and he was highly pleased with it. A few well-chosen, comforting words were addressed to the parents and relatives of the fallen, reference being made to the powers given to the laity by the Enabling Bill, and all were urged to work for the Church, rather than for this or that particular incumbent; and lastly referring to the present industrial unrest, he expressed his confidence that the good sense and judgment of the people would prevail and all classes work together for the general good. The Hymn, “For All The Saints” was feelingly sung, and the memorable service concluded by the “Last Post” sounded by Sergt. Pattinson of Bourne. In the evening, a memorial service was held in the honour of the fallen. The Rector took as his text the words inscribed on the window, “I am the Resurrection and the Life.” He clearly explained the idea underlying the window, and connecting the various figures on it, and its special appropriateness to the Church and as a memorial.. A Glowing tribute was paid to the courage and unselfishness of those who had given their lives that we may live, and for King and Country, and words of sympathy and hope addressed particularly to the mourners present, as one who was a mourner himself a mourner. The Late Rector, the Rev. W.H. Langworthy (The present rector of Claypole) organized the idea of the window as a war memorial, and worked hard for its accomplishment, but was unable to be present at the dedication.